America’s Cup USA-11 is one of several America’s Cup racing yachts named America’s Cup that were used by Team Dennis Conner while competing in America’s Cup events. Our America’s Cup, also known as USA-11, competed in the event held in San Diego in 1992! This historic vessel has been beautifully restored and is one of the fastest racing yachts in San Diego, and can go twice as fast as the average sailboat. Our three-hour charters are interactive as guests are encouraged to team up with our world-class crew to grind the winches, and even steer the vessel by taking the helm! No matter your level of sailing experience, sailing on the famous USA-11 is an unforgettable and thrilling experience!

America’s Cup and IL Moro are evenly matched. Like formula one race cars, both of our racing yachts were built under the same formula. International America’s Cup Class or IACC yachts have a height of 115’ off the water, draft of 13’, fin keel with a heavy bulb of lead of 20 tons (40,000 pounds of lead)! They both have carbon hulls, spars, and sails. Our IACC formula boats were designed to be raced in the moderate winds of San Diego during the 1992 America’s Cup competition.

America’s Cup USA-11 was the 11th boat launched globally in a series of 27 of IACC boats built for the 1992 America’s Cup, hence “USA-11”. Italy’s IL Moro ITA-16 was the 16th boat launched. Eight teams from 7 different countries vied in the Louis Vuitton Cup Race to get into the 2-boat match race for America’s Cup races here in San Diego.

America’s Cup USA-11 was owned and raced by Team Dennis Conner. Conner was outspent nearly 10 to 1 by billionaire businessman Bill Koch and lost in the finals of the Defense Series (the Citizens Cup) to America3 (pronounced “America Cubed”). Bill Koch then went on to compete against the Italians with their boat Il Moro and won.

Dennis Conner is “Mr. America’s Cup”. He’s the only one to have won 4 times as skipper. Also, he’s the first to lose the Cup, and then the first to win it back.

As the kid who grew up of modest means in the Point Loma area of San Diego, Conner would go on to compete in 9 America’s Cup campaigns. But that’s not all. His sailing career spreads throughout all sailing disciplines. He has won 28 world championships, a bronze medal in the 1976 Olympics, and was named Yachtsman of the Year three times. He truly is our hometown sports legend!

America’s Cup was first contested in 1851 making it the oldest trophy in international sport, older than the modern Olympic Games by 45 years! It is the pursuit of excellence and still the pinnacle of yachting.

In 1851 a radically designed schooner ghosted out of the afternoon haze and quickly sailed past the Royal Yacht anchored off the Isle of Wight in the Solent, on the south coast of England, an afternoon when Queen Victoria was onboard watching a sailing race.

As the schooner from New York, named America, passed the Royal Yacht in the first position, Queen Victoria turned to one of her attendants and asked who was in second place. ”Your Majesty, there is no second” was the reply. That phrase, just four words, still best describes the America’s Cup, and how it represents the singular pursuit of excellence.

Diverse Sights You Will See While Sailing
San Diego Bay

There is no more beautiful place to be, than sailing San Diego Bay. San Diego Bay is a large natural bay, the third-largest on the Pacific Coast of California. The bay is huge. Twelve miles long, 1 to 3 miles wide, there is plenty of room for sailing races and other recreational boating while U.S. Navy ships and cruise ships come and go.

America’s Finest City with its glittering downtown is perched right on the edge of San Diego Bay. With our outstanding weather, smooth water, and a huge variety of nautical, military and marine sights, you will have a lot to see. As we sail past San Diego Maritime Museum, you’ll see historic sailing vessels like Star of India, The California (official tall ship of California), a cold-war Russian Sub, and the HMS Surprise (a replica of a 24-gun British Frigate). The HMS Surprise was used for the academy award-winning film, Master and Commander, and was also featured in the 4th Pirates Of The Caribbean Disney movie. You’ll be in awe when we buzz the huge bow of the aircraft carrier Midway, a historical naval aircraft carrier now part of the USS Midway Museum located in downtown San Diego at Navy Pier.

The U.S. Navy’s largest base on the West Coast consisting of over 50 ships is right here on San Diego Bay. Active aircraft carriers, guided missile cruisers, destroyers, and high speed experimental military craft actively cutting through the water are a sight to see, especially while zipping along on an America’s Cup yacht!

From sea lions sunning themselves on buoys and dolphins chasing fish to the striking landscapes of Point Loma and downtown San Diego, you will see the sights as few people do…aboard a sleek, scientifically engineered authentic America’s Cup competition yacht! 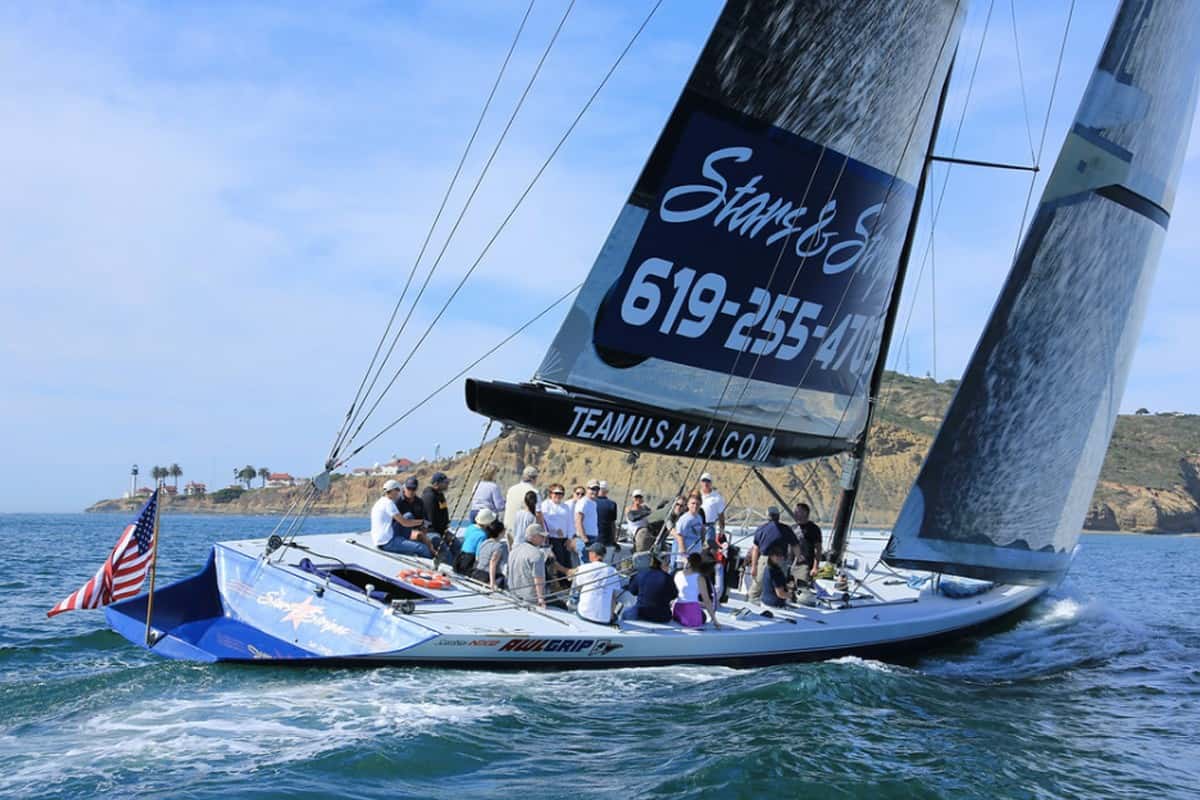 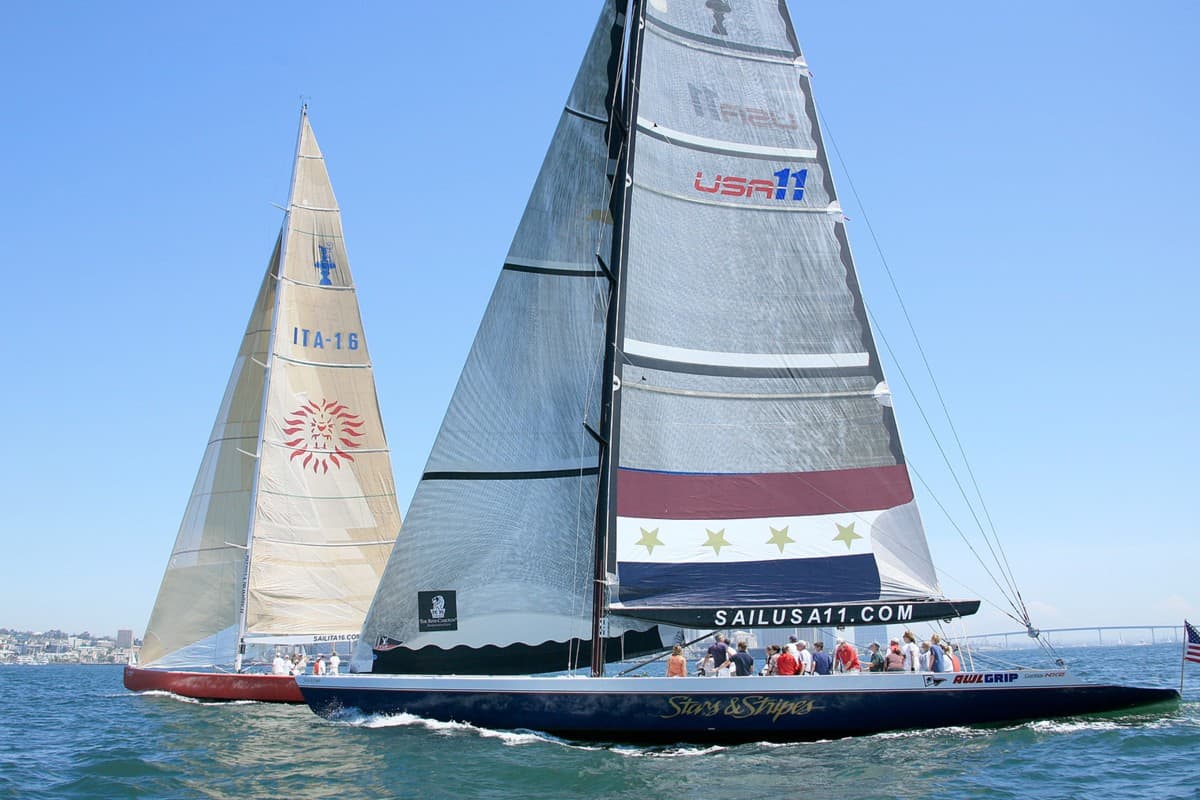 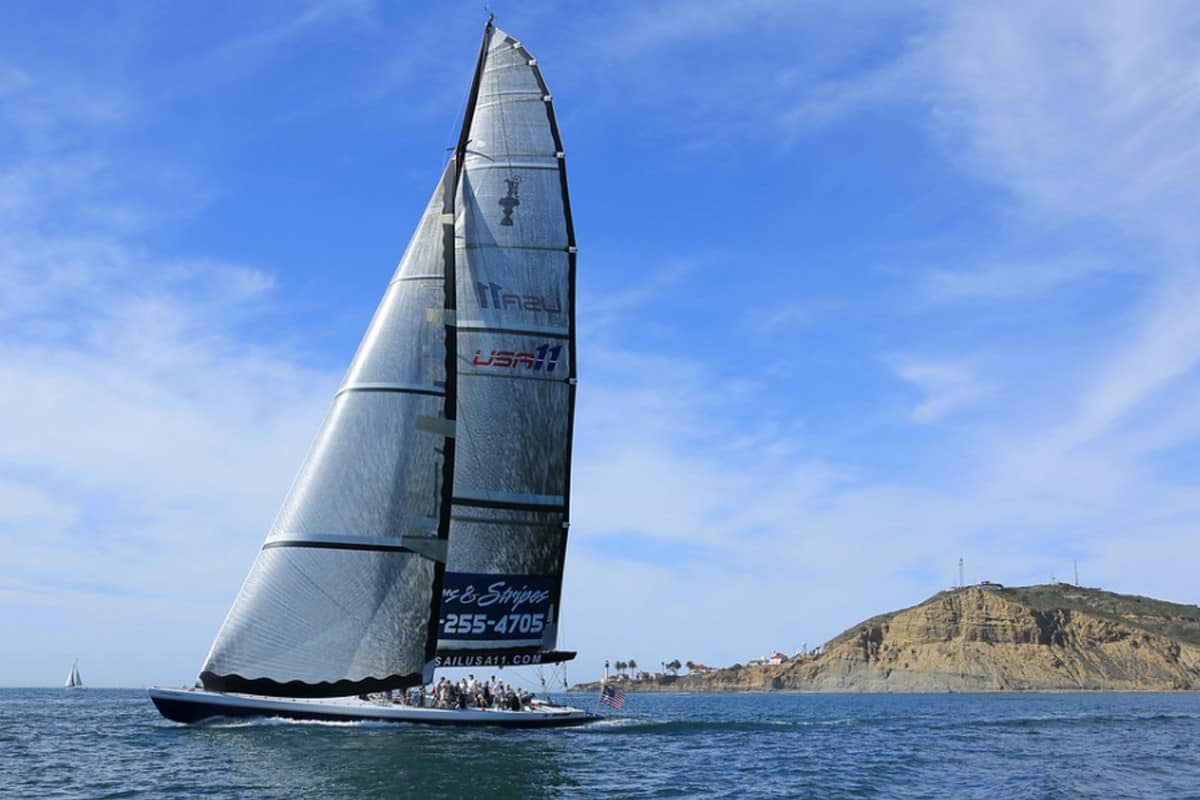 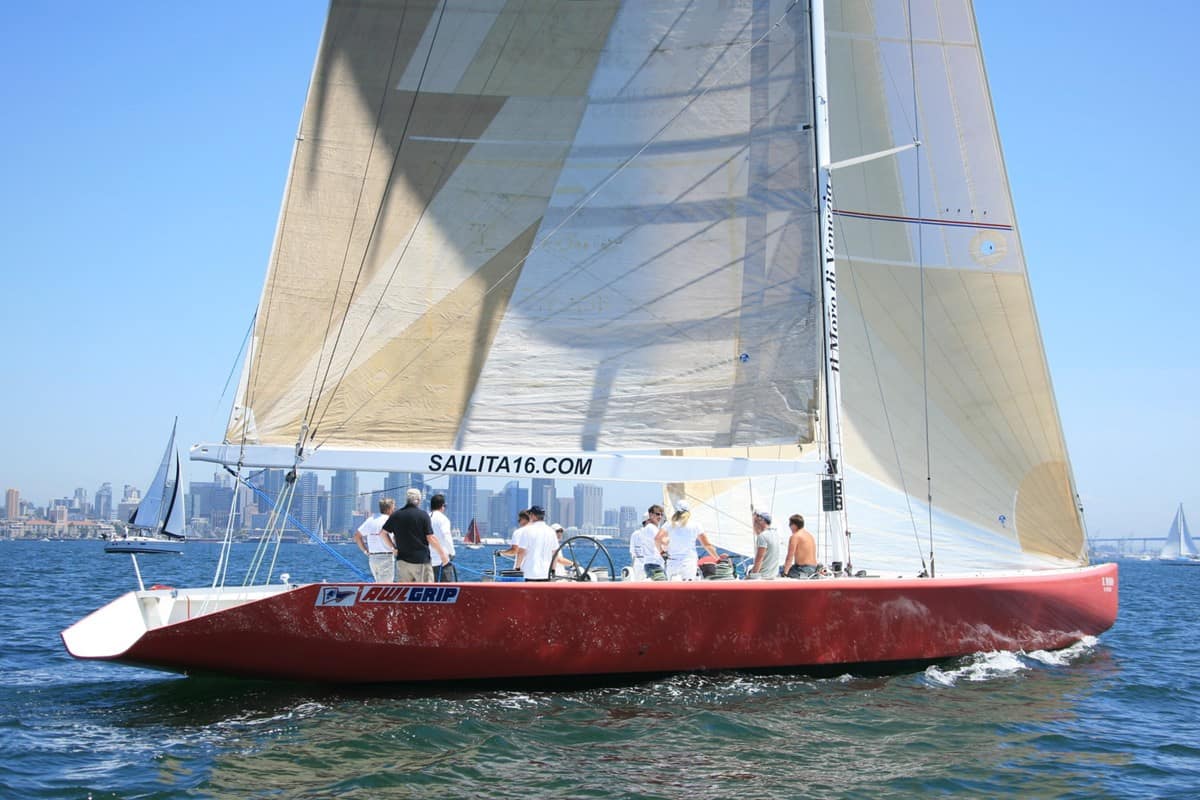 IL Moro di Venezia ITA-16 is an Italian America’s Cup veteran also from the 1992 event in San Diego.  IL Moro is available for racing events versus America's Cup and is well matched as they were built under the same IACC rules.  As a foreign built vessel IL Moro is limited to a maximum of 12 guests, however she can be used for more adventurous activities.  ITA-16 also placed fourth in the IACC World Championship in 1994. 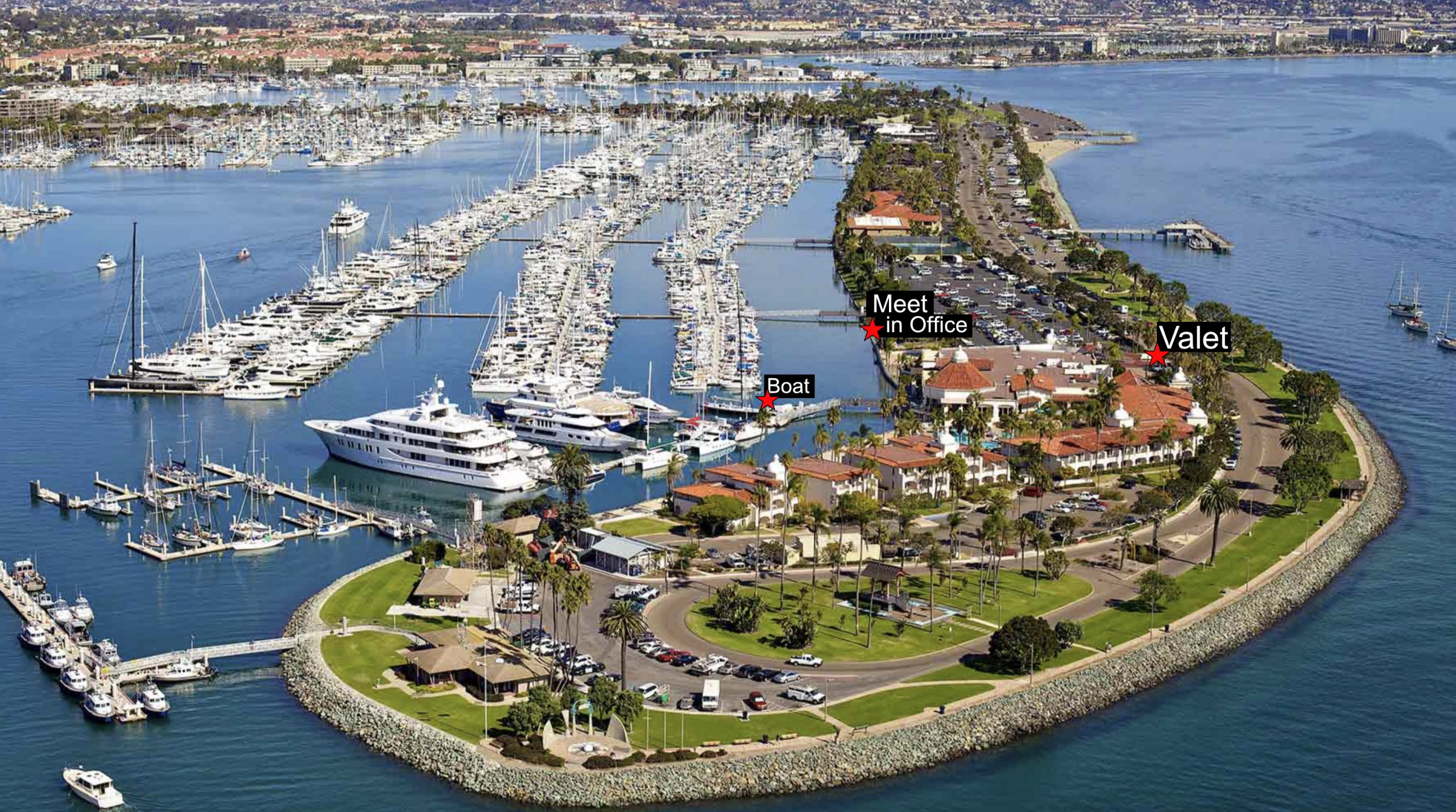